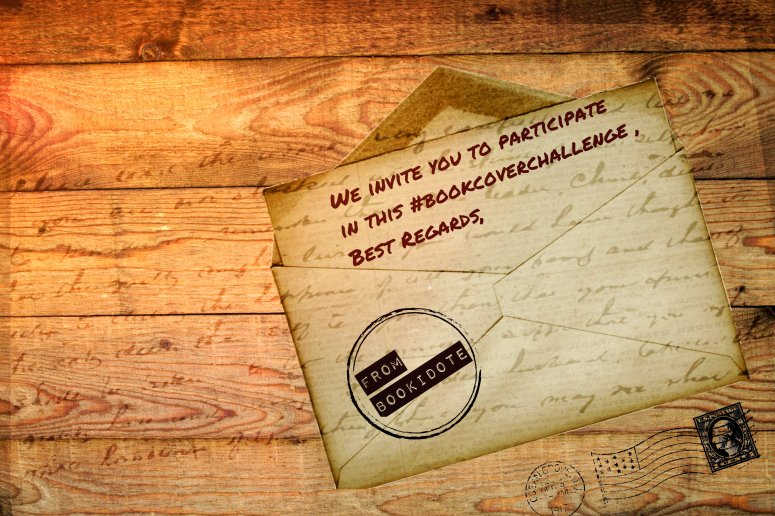 We were tagged by the wonderful Ashley to do the #bookcoverguessingchallenge. This might as well be our first post that isn’t a review or an award on our blog. It might come off silly, but this challenge basically asks you to pick pretty well-known novels that you have none to little knowledge about and try to guess what the story is about. Afterwards, you are to compare your description with the blurb of the novel on Goodreads. Fairly interesting challenge if you ask me. After all, aren’t we all a little guilty for judging some books by their covers? As long as a pretty book cover isn’t your only criteria for a must-read. :O So how about it? Let’s give this a go !

H is for Hawk by Helen McDonald

Trang: She thinks that the book might have something to do with a history teacher that’s insanely in love with animal predators, creatures of war. And one of those creatures is the one on the cover. This teacher, insane as he is, wants to become a hawk and so he studies and learns every strategy and technique these hawks use and use them for himself. That way, he can apply them to humans and dominate others. After all, hawks of like the meanest beasts out there when it comes to survival and attack.

Lashaan: I believe this book is about Falcone the Eagle. Falcone wants to become a hawk cause being the best eagle out there isn’t enough for him. He wants to see what hunting creatures through the eyes of a hawk is like. He then meets with Maroni the Hawk. The biggest, meanest, cruelest and oldest hawk out there. This hawk doesn’t age. This hawk is forever young, wild and free. It travels the world and doesn’t give two cents about other birds opinion. Falcone, seeing that Maroni isn’t the lifestyle for him, learns to avoid hawks and tries to find ways to make Maroni his prey. Only to get rid of such a lifestyle from his life.

When Helen Macdonald’s father died suddenly on a London street, she was devastated. An experienced falconer, Helen had never before been tempted to train one of the most vicious predators, the goshawk, but in her grief, she saw that the goshawk’s fierce and feral temperament mirrored her own. Resolving to purchase and raise the deadly creature as a means to cope with her loss, she adopted Mabel, and turned to the guidance of The Once and Future King author T.H. White’s chronicle The Goshawk to begin her challenging endeavor. Projecting herself “in the hawk’s wild mind to tame her” tested the limits of Macdonald’s humanity and changed her life.

Heart-wrenching and humorous, this book is an unflinching account of bereavement and a unique look at the magnetism of an extraordinary beast, with a parallel examination of a legendary writer’s eccentric falconry. Obsession, madness, memory, myth, and history combine to achieve a distinctive blend of nature writing and memoir from an outstanding literary innovator.

A Court of Thorns and Roses by Sarah J. Maas

Trang: She thinks it’s an intense love story because of all the red on the book. She thinks it’s not just intense, it’s complicated. The story revolves around a magical world with fairies in the forest. The love story would probably be between a girl who’s normal in the beginning but then discovers she’s a fairy in the light world (Rose). She then then falls in love with a guy who’s a sorcerer in the dark world (Thorns). She thinks that, in the book, there’s a ball that happens once in a lifetime at the court of thorns and roses and that’s where the two characters meet. She believes that the two worlds are ennemies but that during the ball, the two characters will set aside their differences only to enjoy the evening.

Lashaan: Alright. I know for a fact that Sarah J. Maas is pretty popular nowadays for young adult books. I’m going to go ahead and say that this book is around a mystical palace far far far away. Somewhere dark and far from the reaches of humans. Somewhere where all witches (not ugly ones, witches that could easily blend with the common mortal) live and enjoy life. The story is probably one where there’s a war between factions, a war for territory? The protagonist probably lives in a palace filled with thorns and roses. Yep. That’s my best bet.

When nineteen-year-old huntress Feyre kills a wolf in the woods, a beast-like creature arrives to demand retribution for it. Dragged to a treacherous magical land she only knows about from legends, Feyre discovers that her captor is not an animal, but Tamlin—one of the lethal, immortal faeries who once ruled their world.

As she dwells on his estate, her feelings for Tamlin transform from icy hostility into a fiery passion that burns through every lie and warning she’s been told about the beautiful, dangerous world of the Fae. But an ancient, wicked shadow grows over the faerie lands, and Feyre must find a way to stop it… or doom Tamlin—and his world—forever.

Perfect for fans of Kristin Cashore and George R. R. Martin, this first book in a sexy and action-packed new series is impossible to put down!

Trang: She thinks it’s about a girl who’s in a video game world and is trying to escapeit. Although to do so she has to play the game and advance through the levels. In the end, she might think it’s a video game world but then realizes it’s the real world and she’s only been imagining things.

Lashaan: I think this one has something to with a virtual world. Something with video games. From what I can tell, the cover has a little ship going up against a fleet of ships (there’s your armade). The story probably has a Tron-like vibe. The protagonist probably has to learn basic survival skills to get through the game and reach some kind of end goal. Maybe the author made this novel to get readers to reflect on virtual reality? Who knows.

But hey, there’s nothing wrong with a little escapism, right? After all, Zack tells himself, he knows the difference between fantasy and reality. He knows that here in the real world, aimless teenage gamers with anger issues don’t get chosen to save the universe.

And then he sees the flying saucer.

Even stranger, the alien ship he’s staring at is straight out of the videogame he plays every night, a hugely popular online flight simulator called Armada—in which gamers just happen to be protecting the earth from alien invaders.

No, Zack hasn’t lost his mind. As impossible as it seems, what he’s seeing is all too real. And his skills—as well as those of millions of gamers across the world—are going to be needed to save the earth from what’s about to befall it.

It’s Zack’s chance, at last, to play the hero. But even through the terror and exhilaration, he can’t help thinking back to all those science-fiction stories he grew up with, and wondering: Doesn’t something about this scenario seem a little…familiar?

At once gleefully embracing and brilliantly subverting science-fiction conventions as only Ernest Cline could, Armada is a rollicking, surprising thriller, a classic coming of age adventure, and an alien invasion tale like nothing you’ve ever read before—one whose every page is infused with the pop-culture savvy that has helped make Ready Player One a phenomenon.

The Nightingale by Kristin Hannah

Trang: She thinks it’s a typical love story in paris. The woman and the man meet in the streets . She thinks it’s about this guy who’s a hobo and one late night, he meets the woman who’s lost in the city. During that evening, he tries to help her discover the streets of Paris but the girl has to return to her country the next morning.

Lashaan: Since a nightingale is a bird with a pretty nice chirp-chirp and that the Eiffel tower is on the cover, I’d go ahead and say it’s some sort of reminescing event that is told. The darkness of the picture also adds to that melancholic vibe if you ask me. So I’m going to say that it’s some story of a past event that’s being beautifully told. Something that’s bound to get readers to shed a tear in the end. I don’t know what else to add.

In the quiet village of Carriveau, Vianne Mauriac says goodbye to her husband, Antoine, as he heads for the Front. She doesn’t believe that the Nazis will invade France…but invade they do, in droves of marching soldiers, in caravans of trucks and tanks, in planes that fill the skies and drop bombs upon the innocent. When France is overrun, Vianne is forced to take an enemy into her house, and suddenly her every move is watched; her life and her child’s life is at constant risk. Without food or money or hope, as danger escalates around her, she must make one terrible choice after another.

Vianne’s sister, Isabelle, is a rebellious eighteen-year-old girl, searching for purpose with all the reckless passion of youth. While thousands of Parisians march into the unknown terrors of war, she meets the compelling and mysterious Gäetan, a partisan who believes the French can fight the Nazis from within France, and she falls in love as only the young can…completely. When he betrays her, Isabelle races headlong into danger and joins the Resistance, never looking back or giving a thought to the real–and deadly–consequences.

With courage, grace and powerful insight, bestselling author Kristin Hannah takes her talented pen to the epic panorama of WWII and illuminates an intimate part of history seldom seen: the women’s war. The Nightingale tells the stories of two sisters, separated by years and experience, by ideals, passion and circumstance, each embarking on her own dangerous path toward survival, love, and freedom in German-occupied, war-torn France–a heartbreakingly beautiful novel that celebrates the resilience of the human spirit and the durability of women. It is a novel for everyone, a novel for a lifetime.

After doing this little challenge, a sudden change in our ritual book review and award posts, we’ve come to realize that this actually got us to check out popular books that meet our eyes every time we wander in a bookstore. Personally (Lashaan), H is for Hawk and The Nightingale really caught my attention. I didn’t think I was going to get hooked to the books that I was about to judge by their covers. Truly fascinating how deceiving the covers can be too, right? Most of them basically caught me off guard. Comes to show the need to never judge a book by it’s cover. I guess, Goodreads is really your best friend when you’re gazing through books in your local favorite bookstores ! Since this post is pretty random and isn’t the typical thing that followers tend to post, we’ll still go on to tag some people to try this challenge out and keep the trend going. Of course, you don’t have to do this. Thank you guys for checking out this post and sharing your thoughts on the challenge or the books we’ve put up for the challenge. So here our the people we’d like to tag:

Anyone who wants to do this tag, go ahead! 😀 You can even say that we tagged you 🙂 Have fun! Thank you again to Ashley for tagging us, we seem to find fun in any challenge/awards thrown at us. Hope it entertains our followers as well ! 😉