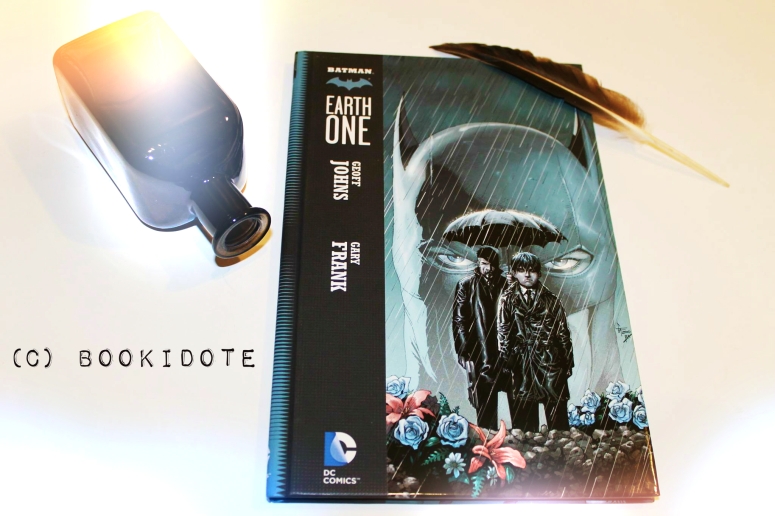 “But I’m beginning to see Gotham has its beauty too.”

Let’s get something out of the way. Sometimes, you just got to dive into a book without having expectations. Expectations are destructive and prone to send you reeling down deception and disappointment. It is true that one out a thousand times, expectations has you jittering, at the edge of your seat and ready to jump out of the comfort of your bed and sky-rocket through the concrete ceiling. This isn’t due to the fact that the author conveyed a story that met your expectations. It’s because they managed to surpass what you wished would happen and have you explode in happiness to the big surprise the book has gave you. Do you see what I see? The secret to a splendid read? It’s in having none to little expectations. Now friends from far lands on the world, be very wary about your level of expectations. It’s for your own good.

It might come as a surprise, but we’re about to enter uncharted territories. A revamp of Batman’s debut story that however doesn’t score very high in my books is what we have with Batman Earth One (Volume 1). What we have in this story is a Bruce Wayne blinded by a unquenchable thirst for revenge. Revenge for the tragic story around his parents. Looked over by the great Alfred Pennyworth, Batman hunts for the individual responsible to tragedy while lending a helping hand in the apprehension of a villain that coincidentally stirs Bruce’s past. This series was written by the great Geoff Johns and the help of artist Gary Frank back in 2012. Only the beginning to plenty of volumes to come, Earth One knows as much praise as hate as it ventures in ideas that have created and set the foundation to the one and only man in the dark cowl and cape.

“And I didn’t teach you how to fight so you could go on some insane crusade.”

Here’s the thing. I opened this book with a lot excitement. My body was drenched with joy and I couldn’t wait to find out what Geoff Johns had in store for me. Taking on the origins of Batman and making it modern seemed like an absolutely brilliant idea. After all, comics have went a long way and so many things could be added and changed after the extraordinary storytelling avenues that other authors have managed to explore and exploit through the comic medium. However, what happened with Batman Earth One (Volume 1) was something along the lines of a slippery slope down rock-bottom. It had me questioning the very minds of the writers, then wondering if readers who enjoyed this volume had defective taste buds, only to then realize that I jumped into this book with the wrong mindset.

Geoff Johns remains an amazing writer and could definitely add this series to his list of great works. The plot hovers around Bruce Wayne’s thirst for vengeance and his first missions as Batman. He’s on a tough learning curve as he lets his emotions steer his actions and has yet to understand how to deal with the scumbags in the streets of Gotham without putting himself and others in harm’s way. As he slowly tries to uncover the secrets behind the tragedy around his parents, the story also explores the relationship between Bruce Wayne and Alfred Pennyworth. In fact, Alfred has been truly reimagined in this story as he portrays a character a lot more bad-ass than one would imagine of the tall, skinny and wise man we all love and enjoy seeing Batman getting lectured by. Although Alfred is embodied in a more physically strong and war-molded body, he keeps his wisdom and straight-forwardness. Batman Earth One (Volume 1) also investigates Bruce Wayne’s mother’s story a lot more than any other writer has ever done. This is truly appreciable since the mothers story has been more often than not scarcely mentioned. Fans know a lot more about the father, his surgeon history and his impact on Bruce Wayne.

Several other characters are also developed and, some, had their personas changed drastically. Harvey Bullock knows his introduction in this volume and, boy, must I say that he was one character that shouldn’t have known this much change. In this volume, Bullock is poster face boy, starred in a TV show and has the personality of a rookie cop who’s never seen the real deal before. He plays the role of the innocent, yet dumb, character who learns the harsh realities of Gotham the hard way. On the other hand, you have James Gordon telling Bullock all his faults and lack of restraint in trying to rid Gotham of evil. Gordon plays the cop who’s been under the pressure of criminals thumbs and doesn’t dare to lift a finger on them. Until his values are challenged, push comes to shove and desperate times has him going for desperate measures. These two characters have interesting character development and Geoff Johns does a great job in exploring their chemistry. Yet, I felt that the original characters conveyed better messages than these revamped versions of them. Harvey Bullock was never admirable and enjoyable to hear or see. His attitude prompted more disgust than anything else from my part. What Gordon brought to Gotham city was far more remarkable in his initial origin story than in Batman Earth One. In fact, this brings me to realize that the foundation to Batman’s legacy was far more interesting and genuine than Earth One was able to look into. Although, I’ll still give credit to Geoff Johns and friends for their interesting approach to the Dark Knight. One thing I found unforgivable and despicable is Penguin’s progression in the story. His role in the story (in Gotham city) was quite interesting. However, the ending of the volume left me disgusted. You just can’t do something like that with a character that has so much background and potential in the Bat-verse.

Absolutely beautiful and engaging. That fully characterizes the artwork in this volume. Gary Frank’s talents can be easily observed throughout the story. Gotham city has never looked like the deepest rock-bottom. Dark, shallow, depressing and hopeless. The artwork adds more thick and heavy layers to the greed, corruption and crime that roams the streets of Batman’s neighborhood. In fact, Bruce Wayne’s blinded fury and need to complete his vendetta are impressively accentuated by the artwork. The colors and the finesse in the penciling manages to put emphasis on the rage that consumes our beloved hero. The artwork also manages to portray every character uniquely and somehow easily represents the characters through their body language. I have to say that Harvey Bullock and Penguin were probably the two characters that conveyed mixed feelings in me. Bullock had a more cliche representation and irritated me in the type of character he was to be in this revamp story. While Penguin’s looks weren’t really satisfying. It felt like he was half of what he looked like in most storylines and half human. Yes, penguin never really looked human to me. That made him pretty scary and fascinating. Although the artwork still captures a good essence of the character through facial expression. Finally, some people have problems with Batman’s cowl and armor. I actually found it original and thought it added a little more realism to the superhero. In fact, another element noticed by a lot of readers is Batman’s eyes. As banal as that is, the change is quickly observable. I didn’t find too much problem in it, but I do believe it takes away some elements of fear in the character. Guess sometimes the answer isn’t always in the eyes. Have to show some kind of humanity in the man dressed in black.

Batman Earth One (Volume 1) is a robust attempt in transforming Batman’s origin story. Although Frank Miller’s origin story of Batman in Batman Year One was a magnificent story, Geoff Johns revamp story has its own set of innovations. It’s not easy to challenge a fairly well-anchored origin story in society and bring new perspectives to a superhero loved worldwide. One thing’s for sure, this volume is sure to entertain any newcomers to Batman’s universe and might however be controversial to some heights for other readers. What really marked me is that it didn’t have enough originality for what it was trying to bring to the table. Cliches were implemented here and there and that was sort of a turn-off (from the badass-ness of Alfred to Bullock’s personality).Poignant, startling, dark and beautiful, Batman Earth One (Volume 1) still deserves to be read. It definitely has my attention. I do plan on checking out the following volume and see where Earth One leads Batman. Earth One however doesn’t limit itself to Batman. The idea behind it is to revamp major DC Universe characters and reboot their origins stories; giving readers a new take on our favorite superheroes. If you haven’t already checked it, you should definitely read Superman Earth One as it’s first volume does a brilliant reimagination of the Man of Steel and his origin. Geoff Johns sure does know what he’s doing. At least for some comics. 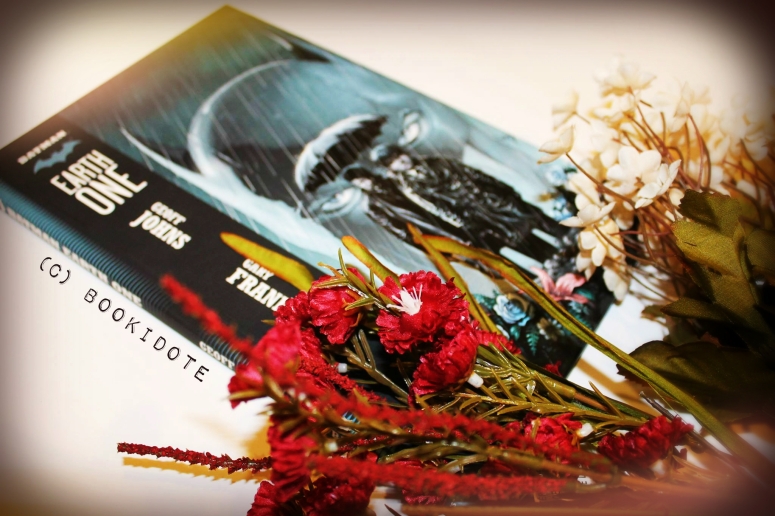 “Who else says he can’t be arrested? Who else is going to let this city be owned by the criminal scum that prey off it? Who else is a damn coward?”

Gothamite! You must not forget to share your thoughts about this review and the comic, as well as like and follow us so we may continue to appreciate the countless Batman stories together. Was this a story that piqued your interest? You can purchase a copy of Batman Earth One (Volume 1)

by clicking on this hyperlink !

17 thoughts on “Batman Earth One (Volume 1) by Geoff Johns”