Before starting, know that I’ll be reviewing Glass Sword first which is the second book to the Red Queen series, you can read my review of the first book here.

This book was a mistake let’s skip to the 3rd one.

No, I’m just kidding! I still have to review it 😉 This sequel follows Mare after she ran away from Prince Maven to find others like her: people who were born as peasant, had red blood ,but ended up having the abilities that Silver people have.

All right Trang, where did this book go wrong? I mean, you still gave it a solid 3, right? To start off, I expected a lot from this sequel since Red Queen was amazing for me—it was a 5 stars well-deserved fantasy action novel. And I’m sorry, but I will always compare novels within their series. But 3 stars go mostly to the introduction of new characters and discovering new abilities ! That being said, let’s go around the ONE THING I found annoying : 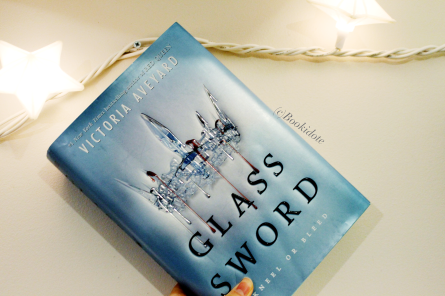 Mare. Straight up, she started off as being very self-centered. It was the kind of personality in a protagonist that I really hate and that I ranted it all about in *ARHUM* Throne Of Glass and The Wrath and The Dawn. Yes. I know. Don’t beat me up just yet. I don’t know if Victoria Aveyard has done it on purpose to make her main character extremely unlikable in this installment, but imagine reading about a teenager who’s switching around having the ultimate power out there to be Queen while having insecurities and need everybody’s attention and validation.  I can picture Mare putting a selfie on Instagram: “LOOK WHO’S RED QUEEN NOW? HMM. NO WAIT. *deletes caption* I’m not Queen yet right..But Maven fckn loves me… I can still be Queen with him .. THAT POWER THOUGH”

I don’t mind seeing a character struggle between raging feelings (like Marie Lu did gracefully with The Young Elites Trilogy). My problem is when the characters start to whine about their condition for freaking 4-5 chapters without any supported facts. For my defense, we did a read-along with some other bloggers and everyone seems to agree with me LOL

If after Glass Sword, you want to give up on this series RAISE URR HANDS! But wait..there’s still hope 😀

A.K.A THE BOOK WHO FINALLY SAVES THIS SERIES

Those who haven’t read the 2nd book yet, should stop here. I’m going to spoil a bit of what happenend in the end of Glass Sword and how it starts in King’s Cage. Mare has finally come back to Maven and “surrendered”. We all know the Maven’s feelings for Mare right..;) It’s an interesting twist in this one ! Kevin @Bookevin even compared it to Shatter Me LOL

I think one of the things Victoria Aveyard has started to understand is that we all hated Mare in the 2nd book, so she held her captive to shut her up and move on with all the other characters. LOL Noo, not true, but what I mean is that we get to see different POV’s , which is a new structure we aren’t used to in this series. I think that’s a really nice thing to do! I was gladly surprised about WHOSE POV’s it was from 😉 Can you guess?

Mare charater development is a little bit better too, so I was happy with that.

“Something in his eyes has gone far away. And at his collar, the slightest gray flush rises, painting his neck and the tips of his ears. He’s terrified. For a second, it makes me happy. Then I remember―monsters are most dangerous when they’re afraid.”

Maven’s focus in this book is heartwarming ! We get to really see what shaped him and what inspired him to be who he is. You think you hated his mother? You will be so happy she was FRIED by Mare. I won’t say nothing more about this topic.

The war and politics theme is very well described and detailed. I love the fact that Victoria Aveyard succeeded in bringing such complexity into a Young Adult novel.

The actions and events were average, not amazing, you can start to see the pattern behind Aveyard’s writing and it’s pretty predictable. Furthermore, Mare and Maven’s relationship is .. touchy.. heheh. I don’t know if it’s the Stockholm Syndrome or it’s just the fact that we had to ship these two for the sake of the love-the-bad-boy-trend. Maven is the boy we love to hate. But I have to give the award to Aveyard for wording this complicated relationship to perfection.

Overall, I enjoyed this book VERY MUCHHH ❤ Compared to Glass Sword, it was an enormous upgrade ! You can buy the books here :

25 thoughts on “King’s Cage : How This Book Saves the Red Queen Series”