I’ve seen a tag going on about this topic recently, so I was thinking about talking about the books that I found not so my liking as opposite to all the hypes. I’m usually what you call a nice reviewer, the books I read always end up having 4-5 stars. But not today. Maybe some of you will be like, oh my god I’m not the only one!? Or this might shock you or enrage you but my opinions are very subjective so are yours 😉 Let’s keep it that way!

*Disclaimer : I will rage a lot ahah so don’t take it personally.

THE WRATH AND THE DAWN BY RENEE AHDIEH

I think it was a joke to the original story, from the characters to the plot , nothing was to my liking.

An excerpt of my review: The way she tells the stories at night is supposed to be mesmerizing and enchanting. But I didn’t feel any connection. In fact, it was so dry and fast, I was surprised that  kind of story would keep a prince awake until dawn. Like I’ve read it in 10 mins.. I’m pretty sure she can do better than that. AND THOSE CLIFFHANGERS SHE LEAVES AT THE END ?? If I were the prince I would be like Avada Kedavra!!

THRONE OF GLASS BY SARAH J.MASS 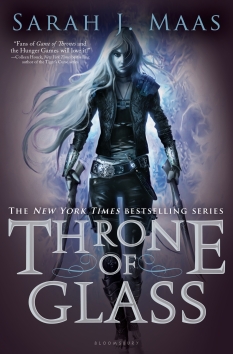 This one was special because I didn’t enjoy it until … the last 10 pages of the story. So was the book worth it as a whole ? Not really, but that may be an indication that the sequels will be !

Excerpt of my review:

Also, I expected way too much from our protagonist. I expect her to be kick-assk, cold hearted murderer and assassin.She was the opposite. Sensitive, princessy-like, fall in love too quickly for an assassin who is supposed to kill people and not get attached easily (that’s only my opinion in comparison with other assassin’s characters I’ve read so far).

A COURT OF THORNS AND ROSES BY SARAH J.MASS

I didn’t like the protagonist, nor the pace, nor the plot… I think I have something with Sarah J. Mass stories.

Excerpt of my review:

One of the worst pace I’ve read so far. It’s soo sloww, I’ve never experienced this turtle speed before. 400 pages like that, I tend  to read very fast but it was so boring at times I had to pause and delayed it. It’s only when it hits 300 pages that the pace went from really slow to really fast. WTF MAN? It’s like in the last 100 pages, she got the chance to eat breakfast, go to a concert, learn the violin, save the world, save the entire nation and becomes Mrs President in the same day.

I think this one is my first one star review ever on this blog.

Excerpt of my review: : Ouhh a dragon who kidnaps the girls in the village! :O BUT NO. WAIT. A dragon? No no. It’s not even a frkn dragon, it’s a guy named Dragon… and apparently he takes a girl in the village every now and then (but no one knows why) AND OF COURSEEE as expected,  the girls don’t get tortured or whatever. They leave peacefully and has everything they want WHILE being taught magic. Dramatic.

68 thoughts on “Unpopular Book Opinions – WTF Was That”