I recently stumbled on a few quotes while scrolling my social media and the more I analyze them, the more I realized how silly they are. Do you ever just stop and think about what those quotes mean or why people are throwing them around left and right? I get it. You want to motivate people. You want to make them feel better. But .. do they really? For my part, I don’t think it does any good. More bad than good actually.

They’re short and vague as hell.

My main problem with these so called “inspirational quotes” they’re so vague that they can mean everything and anything. Let’s take this quote. 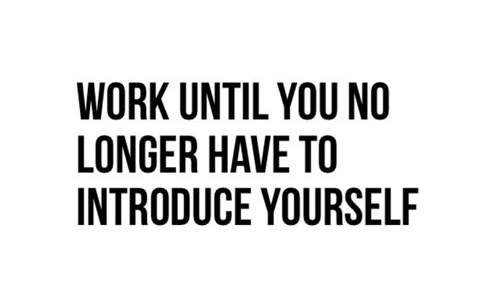 At first you read it, and you’re like damn, such a #boss CEO type of quotes. But what does it mean exactly? You think that not introducing yourself is BAWS? Like you’re so successful and popular that everybody knows you right away? Even Bill Gates introduces himself when he talks to people. Because humility. There’s no success if you don’t have humility, my friends.

Quotes taking out of context are called quote mining and it’s an informal fallacy, where it’s removed from the original medium and platform to distort its intended meaning. For example, Vince Lombardi’s quote: “Winning isn’t everything, it’s the only thing”. He even said that he regretted it being one of his famous quotes :

I wish to hell I’d never said the damned thing,” Lombardi once told a reporter. “I meant the effort… I meant having a goal… I sure as hell didn’t mean for people to crush human values and morality.”

When you don’t the true context, you can interpret it differently. Another popular quote always taking out context or dare I say, get a whole metamorphosis is :

YOU ARE WHAT YOU EAT.

The real quote is : “Tell me what you eat and I’ll tell you what you are,” indicating that diets differed by class and profession.

They’re an excuse for you to not do the work.

Serious question: what do you do right after reading that quote? You feel a rish of adrenaline and then keep scrolling. It comforts you to know that you just read some memorable words but you don’t actually do anything. So just get up and do the work.